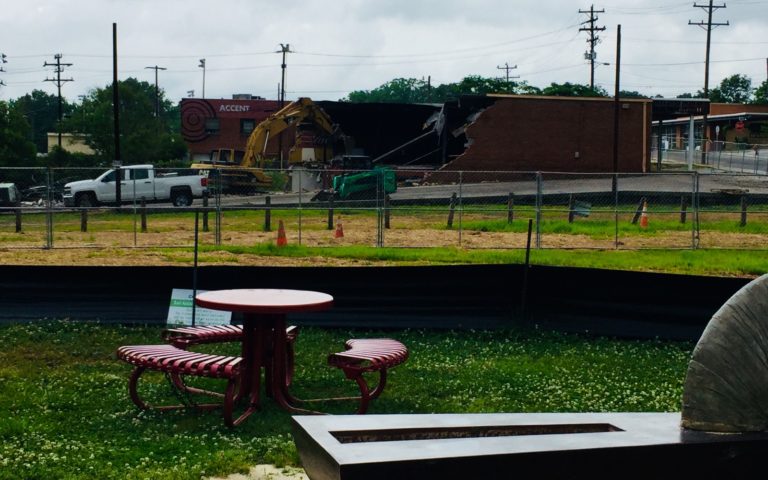 The view around Durham Central Park is changing again. On Thursday, a construction fence went up and the building just to the north of the park is coming down. This property, at 539 and 545 Foster St., will soon be home to a new apartment building called Foster on the Park. The property is owned and being developed by Blue Heron Asset Management, a Raleigh based investment firm.

During the construction phase of this project there will be some impacts on the park. Here’s what you can expect over the coming months:

Despite the new construction project next door, Durham Central Park will remain open. All of the activities scheduled in the park, including the Durham Farmers’ Market and Durham Craft Market, will continue without interruption.

History about this Project

Blue Heron acquired the property more than 5 years ago and had initially planned on building condos on the site back in 2015. However, their plans changed and they made adjustments to their development and decided to build an apartment building instead. In early 2017, Blue Heron approached the City of Durham to ask for easements on park land. The City Manager asked the Durham Central Park Board to meet with the developers and make a recommendation of improvements that the developer could make to the park in exchange for the easements.

The DCP Board convened a committee to work on this project. Over several months, representatives from the DCP committee, City staff members, and folks from Blue Heron had a series of meetings to determine the park improvements that best fit our master plan. During these meetings, DCP’s objectives for the park came directly from the community input that was gathered in 2016 as we updated our master plan. These objectives are:

As a result of these meetings, DCP, the City of Durham, and Blue Heron agreed on the following improvements to be made in Durham Central Park by the developer which were recommended to the City Manager and memorialized in the development agreement, including:

There is a precedent for developers making improvements in the park in exchange for city granted easements onto park property. The City Manager has asked the DCP Board to make recommendations for park improvements for both the Liberty Warehouse Apartments and Brannan developments.

Durham Central Park is a 5 acre city owned park in the heart of downtown Durham. DCP, Inc., a 501c3 non-profit organization holds a management agreement with the city to operate, develop and manage this park. DCP, Inc.’s mission is Providing Space for Community and is committed to building and maintaining a public park where everyone can feel welcome.