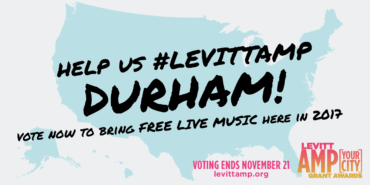 We need YOUR vote for $25K! Durham Central Park, Inc. is now in the running to bring a FREE 10 week live music series to Durham, June-August 2017.

Sponsored by the Mortimer & Mimi Levitt Foundation, a national foundation dedicated to strengthening the social fabric of America through free live music, Durham Central Park hopes to qualify as one of 15 winning organizations competing in the Levitt AMP Durham Grant Awards.

The awards are an exciting matching grant opportunity created by the Levitt Foundation to serve small to mid-sized towns and cities with populations up to 400,000. Up to fifteen nonprofits will receive $25,000 each in matching funds to produce their own Levitt AMP Music Series—an outdoor, free concert series featuring a diverse lineup of professional musicians.

Supporters are asked to visit https://grant.levittamp.org/voter-registration-page/ to register and vote. Online public voting is now open and ends November 21 at 5:00 p.m. Pacific Time. The Top 25 finalists will be selected through online public voting. The Levitt Foundation will then review the proposals of these 25 finalists and will select up to 15 Levitt AMP winners, which will be announced on January 5, 2017.

“Durham Central Park’s public surveys and charettes show people value Durham Central Park as a gathering place and want more FREE concerts at the Park. This is the way we can make it happen, with your help,” says Tess Mangum Ocaña, who co-wrote the grant with DCP Executive Director Erin Kauffman.

Durham Central Park asks supporters to start spreading the word to family, friends, colleagues and neighbors and rally the community to sign up and vote for Durham Central Park’s proposal. Voters must be 18 years of age or older and U.S. residents (or residents of U.S. territories.)