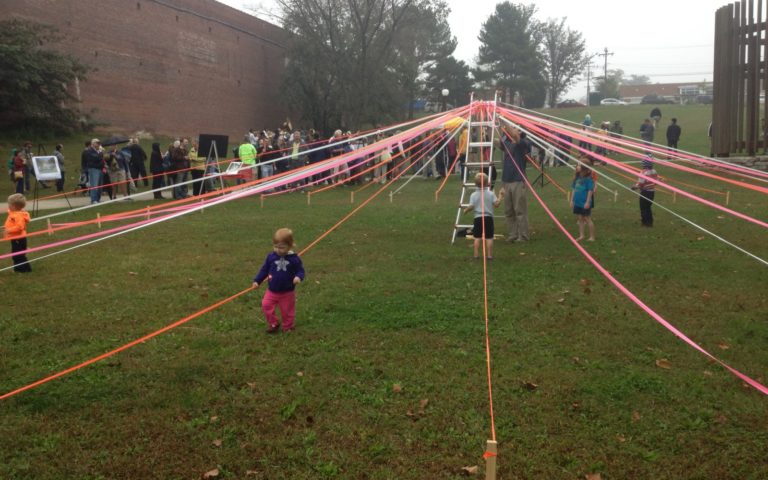 From the desk of Ann Alexander, DCP’s Executive Director: Saturday, October 19, marked the unveiling of the plans for Mt. Merrill, the next phase of Durham Central Park’s master plan of Wanderland, a children’s interactive play area on the East side of the park. With help from the Exchange Club of Greater Durham, of which Merrill Davis was a beloved member, and other generous donors, we have already raised around $15K of the $120K needed to build and maintain this wonderful structure for the park!  Hundreds of folks, both old and young, gathered in the drizzle to hear about the plans of the play mound and see drawings of what will be built as the next development phase of DCP.  Mt. Merrill is named after Merrill Davis, a longtime DCP neighbor and supporter of the park who died in a tragic car accident in October of 2012.


When we asked in a community survey a few years ago what folks wanted to see more of in DCP, the overwhelming answer was,” MORE PLAY AREAS for children…the climbing turtle and bird are great but we need more!”   So DCP’s board has been busy working with Katherine Gil, landscape architect of Tributary Design and Build, to come up with a unique design that is something the kids will love and will be a great addition to the park. As with all other improvements in the park, DCP gets no funding from the city or county. Instead, they raise money from folks, just like you, who consider the park their own and want to see it grow and prosper!  Since we have unveiled the Mt. Merrill design to the community, DCP’s board has begun the fundraising efforts to raise the $120K that is needed to build Mt. Merrill by seeking donations from community members, organizations and businesses who support the park and its efforts to keep DCP the most vital and fun park in Durham!  Join us in our efforts by clicking the donate button in the upper right hand corner! More photos: http://www.flickr.com/photos/durhamcentralpark/sets/72157636802581893/