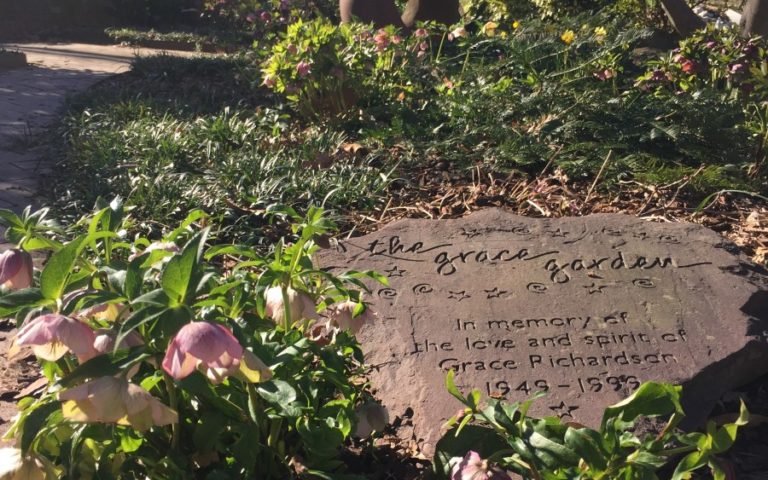 The Grace Garden wins the Neighborhood Garden and Landscape Award 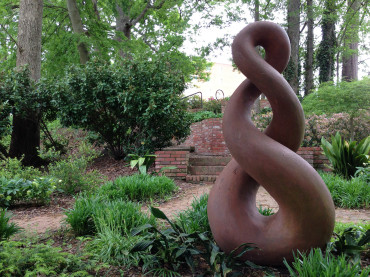 The Grace Garden was the first garden installed in Durham Central Park. The garden is dedicated to the memory of Grace Richardson, who died in a tragic drunk-driving accident. After she died, her friends, family and many people that she touched in the community raised the money to create a garden in her memory. It was constructed in the spring of 2001 by dozens of volunteers in a great community building event with Masonry done by TROSA.

The Grace Garden is one of several gardens on the west side of Durham Central Park. It offers a secluded and shady but of Zen-like quiet beauty in the middle of the city. The garden features local art by Andrew Preiss, bench seating, and a menagerie of beautiful plant-life.

Mt. Merrill, as many know, is our interactive children’s play area on the east side of the park. It is a handicap accessible mound that offers 2 slides, a climbing net, a boulder climbing area, and a lookout on top. It was designed by the DCP design committee and Tributary Land Design and then built in 2014 by CT Wilson. Mt. Merrill officially opened in December of that year and has been a nexus of activity in the park since then!

Mt. Merrill is named in the memory of Merrill Davis of Stone Brothers and Byrd. Merrill tragically died in a car accident in 2012. During his life, he was a huge supporter of the Park. He was volunteered his time, expertise, and resources to build the park into what it is today. He and his wife were some of the first people to be married in the park after the Pavilion was built. After Merrill’s death, his friends and family approached DCP about putting a memorial for Merrill at the park. At that time, DCP was starting to work on the plans for a play area for children and it worked out that we were able to work collaboratively to create this fantastic play mound in Merrill’s memory. 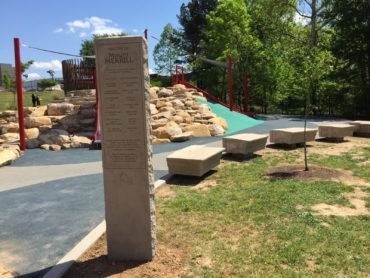 One of the reasons that the judges chose Mt. Merrill for the Keep Durham Beautiful Award because of the incredible amount of community support at all stages of this project. It was designed with the input of the community, particularly parents looking for an exciting place to let their children play. The funding for the project came from all over the Durham community. In addition to a successful Kickstarter campaign, backed by hundreds,  we had major support from local businesses and individuals to make Mount Merrill happen. The key supporters for the project were East West Partners, PNC Bank and The Durham Lions Club (where Merrill was an active member). The other major donors are listed on the monument at the entrance.

Since Mt. Merrill opened, Stone Brothers and Byrd has taken on the (sometimes thankless) duties of keeping the trees and grass growing around Mt. Merrill.  In early 2016, local artist, Al Frega, installed benches that were made from reclaimed limestone cornice stones from the Southern Railway Freight Depot and Durham Marble Works installed the entrance sign. Currently, we are working with Acme Plumbing on the plans to install a water fountain. We are hoping to have that installed by early summer.