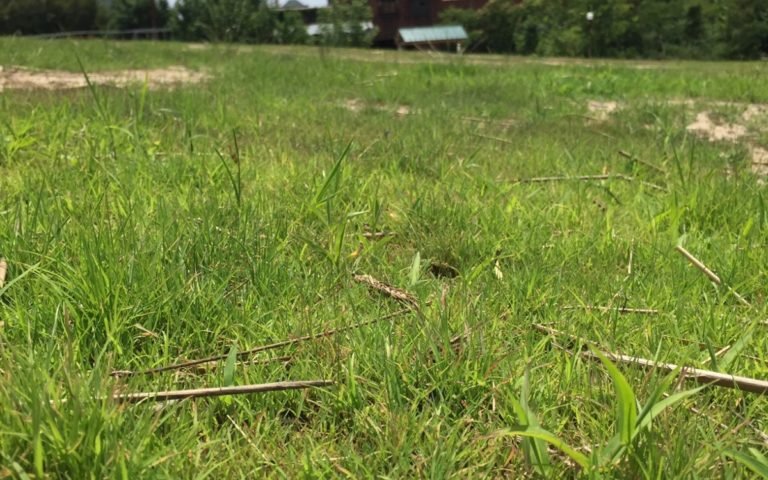 Have you been wondering what’s going on inside the loop sidewalk near the pixel wall and the skatepark? Well, we are growing grass!!

This area is named the Great Lawn, but for the past couple of years, it has been a little less than great. Here is the back story.

On the site of the Great Lawn area, there once stood a tobacco auction warehouses  Mangum 1 & 2. These warehouses were similar in size and use to the former Liberty Warehouse. It was demolished in the 80s, but all kinds of pieces of the warehouse were left in the field- concrete, glass, nails, wood beams, various metal, and even artifacts like an old fashioned cash register and the base of a blender.

In the 1990s, the idea of building a downtown park came together and by 1999, Durham Central Park was established. In every iteration of the master plan for the park, it was envisioned that there would be a loop sidewalk on the east side of the park. But, raising money to build a sidewalk not an easy task, so building that sidewalk remained a dream for the future.

In 2016, the builders and developers of Liberty Warehouse Apartments very generously built the loop sidewalk that serves as an accessible link between Rigsbee and Foster streets. They had a need for a sidewalk per the city ordinances and we had a sidewalk that we wanted built. It was a win-win situation. There were several months that year when the east side of the park was closed for construction. At the end, grass was planted in the center for the “Great Lawn”,  but the new grass just never took root.

Once we realized that our new lawn was not taking off, our organization started working through various plans, timelines and budgets for getting the grass on our Great Lawn re-established. Late last winter, we received very generous donations from both the developer (East West Partners) and builder (Clancy-Theys) of Liberty Warehouse Apartments. With funding secured, we were able to pull together a workable plan to get the grass re-established.

As with many projects at Durham Central Park, it has been a team effort! First, we had to start by getting all of the rocks and various debris that was all through the lawn area dig up and moved out.  On the first Saturday in April of this year, 35 volunteers came to the park ready to dig! We excavated tons of rocks and concrete  and have found uses for them around the park.

Once the big stuff was out, our friends at Durham Parks and Rec started to rough up the ground by tilling and aggressively aerating. In the process they found even more rocks and concrete! After a few frustrating rain delays, we hired TROSA to come in and remove the rest of the gravel and add 84 yards of topsoil. Then, almost one month after we started, grass seed and fertilizer were finally sown.

We have BABY GRASS!!

Since the grass was planted, we’ve barely gotten any rain. So, DCP employees, Bryce and Erin, have been diligently keeping the area watered. Our new neighbors at Liberty Warehouse Apartments have generously donated access to their water to help get the grass established. We are so thankful to have such generous neighbors!

The baby grass has slowly been emerging and spreading. We nearly have a fully green hillside. Many have asked what was planted, with the sage advice of Durham Park and Rec and George Davis from Stone Brothers & Byrd, the decision was made to plant common Bermuda. It’s a warm season grass that can take a lot of foot traffic. The lawn won’t be open for at least another month, but we are looking forward to having a newly established grassy area for people to play on and enjoy!

Winter Market: Saturdays from 10 am-12 pm. No early entrance to the market this season due to new safety protocols and face masks are required at this time for entry. Contact your vendor for curbside pickup of preorders on Hunt … Continued