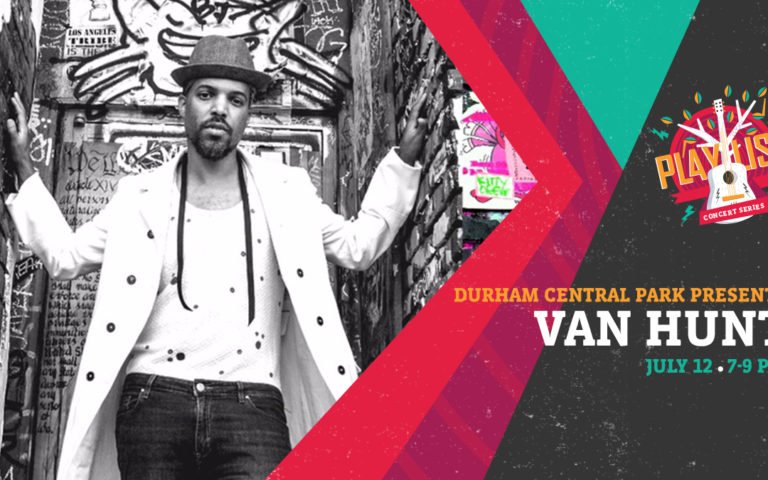 “Inspired by the music of The Delfonics, Parliament-Funkadelic, Pink Floyd and Billie Holiday, Hunt chronicles love, loss, and nostalgia through the sounds of original funk and old soul. He achieves the kind of heated, raw sound that has virtually disappeared in to much of today’s overly-manicured R&B and Hunt never loses sight of the past as he progressively forges his own way forward” –The Boston Globe. VAN HUNT headlines PLAYlist, Durham Central Park’s free, annual concert series Friday, July 12, 7 p.m.

A Dayton, Ohio-born musician, Hunt made his way to Atlanta where he drew acclaim for his production efforts and crafty songwriting, featured on recordings by such diverse artists as Dionne Farris and Rahsaan Patterson, as well as the platinum-selling soundtrack, Love Jones. 2019 marks the 15th anniversary of his own self-titled debut album.

It instantly established Hunt as a distinctive and original talent with its idiosyncratic melding of R&B, soul, funk, pop, and rock ‘n’ roll. Hunt received a 2005 “Best Urban/Alternative Performance” Grammy nomination for his breakthrough hit single, Dust featured on that album.

Parking is free in the lot beside Durham Central Park, and there are metered spaces along Foster Street which change to free parking meters after 7 p.m.

Picnics, blankets and folding chairs are welcome. Local food trucks and craft beer vendors will be on site serving at 6 p.m. There are restrooms at Durham Central Park and the venue is wheelchair accessible. For more information, visit https://durhamplaylist.com/